Not All Solar Installations Are Equal

Not All Solar Installations Are Equal

When you first embark on your solar journey, you will soon find yourself becoming overwhelmed with the vast amount of information that will be thrown at you from different websites, companies and salespeople. It will vary and it can be confusing.

So what information is truly relevant?  And why is there such a big variance in price between quotes?

The truth is when you are comparing quotes for solar installations there are several factors that must be considered other than price.

The obvious place to start is to compare the brands of the two most important products; the inverter and panels.  Let’s focus on the solar panels: An important thing to note when comparing brands is that not all Tier 1 panels should  be considered  equal.

Just because a panel has a Tier 1 rating, does not mean that it is of the same quality as other Tier 1 panel brands, it is simply just high enough to make it into that Tier.

An installer can easily save $1000  on a 6.6KW system by simply installing a cheaper Tier 1 panel when comparing it to one of the top brands such as Longi.

Apart from the Quality of these brands you will also need to consider the longevity of the companies themselves.  Far too often in the solar industry both Installation and Manufacturing companies go bust, leaving customers with nowhere to turn for any potential warranty claims or after sales service. In fact for some companies that is their strategy to begin with.

This leads us straight into the next key point that you must consider when comparing quotes from different solar installation companies:

Are the companies that you are comparing Equal?

In this example the small contracting company will of course be able to deliver a cheaper price due to the lack of overheads they carry.  However, with this cheaper price also comes extra risk.

The majority of new solar companies will fail after 3 to 4 years. You should only consider solar companies that have been in business for at least 5 years but preferably 10 years. Otherwise this adds great risk to your decision.

The other thing to consider is maintenance and any other issues that may arise.  Established companies such as Goodhew Electrical and Solar have dedicated maintenance and servicing crews.  This means that should anything ever go wrong we can get a qualified installer out to you very quickly. Whereas the small company does not always have the ability to do this.

The final and in some ways most important key thing to consider when comparing quotes for solar installations is who is actually going to be doing it.

Some large solar companies have grown in size so much that they now sub contract out installations and now act as more of a marketing and sales company instead of an all-in-one solar installation business.

From a customers perspective this can often lead to cheaper installation prices, due to the fact that the sales company has a set cost for the labor on each install and does not need to allow for the extra often time consuming components that vary between each install such as more difficult cable runs, appropriate brackets because the screw lines do not line up or simply just a more time consuming solar panel layout.

This is a double edge sword for customers, as they will often get a cheaper price for the install because the sales company is not factoring in the labor costs for these additional tasks, however this also means that the contractor doing the installation is not getting paid correctly for them either.

This can often lead to contractors taking short cuts on the installations, because they have been underpaid for the amount of work that is truly required to do the installation correctly.   This can lead to rushed installations which in turn leads to poor workmanship and only leads to issues for the home owners later down the track.

Even the best brands, if installed incorrectly will under-perform.

Below are some photos taken from an Installation that was installed by a company that is no longer in business.  We were called by this home owner to come out and inspect the system as it was no longer working. After several attempts to try and contact the original installer as well as the original company that sold them the system, they realized they were no longer in business and instead had to call us to come out and diagnose the system.

This is what we discovered upon inspection.

A burnt-out isolator, most likely caused by either loose connections or water egress.  We had to replace the isolator and also re-run the wiring and conduit.  As you can see in this picture the cables and conduit enter the top of the isolator, this is not something that should be done on an external isolator as you are leaving a pathway for water to enter the enclosure. 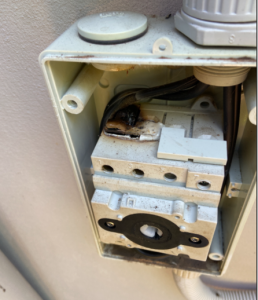 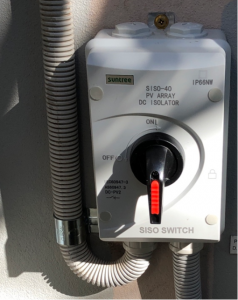 Had this been done correctly in the first place the isolator never would have burnt out resulting in a potential fire hazard.

This was not the only sub-standard component that was found on this installation.  We also had to change the roof mounted isolator and re-run some of the DC cabling and earthing resulting in a $1200 bill for the customer.

Luckily for this customer nothing went wrong and we were able to quickly make the system safe and get everything back up and running.

We get several of these call outs every single week, going to fix existing solar installations from companies that no longer exist.  So next time you are comparing Quotes regardless if it is for solar or any other sort of construction work, remember to look at the bigger picture.  Sometimes saving money in the short term will actually cost you more in the long term.

PrevPreviousWhat is a Solar Hybrid System?
NextWhat Could Be Better Than Solar Hot Water?Next