Solar Batteries – What are they and how do they work? A guide to becoming energy independent

Solar Batteries – What are they and how do they work? A guide to becoming energy independent

Solar Hybrid Systems with battery back-up are becoming the standard solar option for both residential and commercial installations. Solar batteries allow you to harness the excess energy generated by your rooftop solar system and store for later use. You can draw energy stored in the solar battery at night or during dark, gloomy days to power your home. This guide explains what a solar battery is, how it works and why you should install one in your home.

What is a Solar Battery?

Put simply, a solar battery is a battery that stores energy from your Solar PV system. The most popular solar battery technology is Lithium. Recent technological advancements to Lithium batteries means that they are reliable, efficient and more affordable than ever before.

How do Solar Batteries work in a Hybrid System?

Solar panels on your roof turn UV light into direct current (DC) power. An inverter then turns the DC current into alternating current (AC) for use in your home. The AC current feeds your switchboard and from that powers your TV, air-con, fans, lights and power points. The solar battery stores excess (or unused) power and, when fully charged, the excess electricity generated then feeds back into the grid. A solar meter measure how much your solar system exports to the grid and calculates your credit based on the agreed feed-in rate.

The grid can still be utilized by a standard hybrid system, ensuring that your home remains powered should anything happen. When your system produces excess electricity, it gets fed back into the grid and you’ll use this at night or days when there is not much sunshine.

What are the benefits of Solar Batteries?

Solar batteries have gained popularity in the last couple of years as people look to reduce reliance on the grid by generating and storing their own energy.  Benefits of a solar battery include the following.

Make the most out of your solar system

Your solar system generates the maximum energy during the day with excess being sold back to the grid. This is generally for only a fraction of the cost to buy electricity. Adding a solar battery storage capability to your solar system will retain the valuable solar energy generated during the day to power your home at night. All while avoiding paying high supply charges to your electricity retailer.

Keep the lights on during blackouts with solar battery backup

Blackouts are an inconvenience at the best of time. With recent widespread events seen in Queensland such as the Callide explosion blackout, there’s no better way to keep your lights on than with a solar battery system. Energy stored in the battery will power select circuits or, in some cases, your entire home during a blackout.

Installation of a solar battery is straightforward and can be retrofitted to most solar systems. For existing systems, you may need to upgrade your inverter to a battery-ready inverter – the most popular brand of solar battery inverters is Goodwe. Goodwe is a trusted global inverter manufacturer and its products consistently rank in the world’s top 5 solar inverters.

Some battery storage systems are wall mounted similar to Tesla Powerwall, others are floor standing or installed inside a battery box. You can choose to install multiple batteries to increase your storage capacity. For those with an existing solar system, the solar battery is best located below or adjacent to the inverter charger. It is important to note that batteries cannot be installed in habitable rooms such as a living room or bedroom. When installed in a non-habitable room such as a garage, you may need to consider ventilation in some cases. 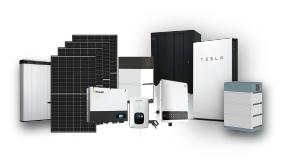 Goodhew Electrical & Solar are the experts in solar batteries and hybrid solar power systems. With a wide range of packages to suit your needs, give us a call today and speak to one of our Solar Consultants.

PrevPreviousNew Home Solar – Why you should add solar during your new home build
NextHigh feed-in tariff? How to make the most of itNext